If you're interested in playing adventures on the fly or without a GM, there's a requirement to kind of just dive in and trust what's coming at you much like improv. Saying yes, setting up the player, trust - these are words you'll hear in a improv class and while I haven't played any group gmless play, I've tried playing solo on the fly and I'm sure that these improv "rules" are essential to making a gm-less/ on the fly (with a gm as well) group session successful.

But is it practical to just wing it? I'm looking for some sort of structure that can prompt or help details to emerge without it being forced. Without structure there's just too much chance for it all to fall apart especially if the players are not 100% committed. I do love random tables and I think that they can work well but sometimes it just - yes - feels random and the success of a story evolving in a engaging way must depend entirely on the luck of the roll for successful elements to emerge. I prefer more creative control. What if you could design adventures and have them still be entirely surprising and unpredictable?

What I like most about WOTC's Castle Ravenloft(board game) is the dungeon tile deck. Essentially an entire adventure is programmed/ prepared by what tiles are in the deck. Shuffling the deck, obviously keeps the players from guessing what's around the corner and when the big boss fight happens. While I really love this mechanic about the game, I think WOTC kind of missed the boat on this one though - there's so much more possibilities. Essentially you shuffle a bunch of the random dungeon tiles (which can only affect game play by either prompting 1 monster to appear or 1 monster and a trap to appear) with a end tile (for the boss or ending of the adventure) shuffled into the last 3-5 random tiles.

This could be better:
A) toss some "story" tiles in there where where some kind of event connected with the plot occurs to build dramatic tension or create difficulty for the characters. By appropriately placing story tiles you could create some sort of narrative arc.

B) If the characters have to make a choice on a certain tile maybe that requires placing another "story tile" later in the deck that is connected with the choice made. Or maybe the deck forks into two separate decks. Maybe even the party splits up.

Recently, I stumbled across the adventure funnel: a brilliant simple adventure design template

The reason this works well, is exactly why all modern drama works well. Characters face obstacles - bumping up against problems and forces that are trying to stop them. This is what helps make a story engaging.

So what does all this have to do with gm-less play?

Here's some thought's I've been messing around with inspired by the adventure funnel and Castle Ravenloft:

1) Come up with an adventure hook.
2) Character defines their objective/goal
3) players ask themselves "what could get in my way"? "what obstacles will I face" or "what am I afraid of happening"?
4) Very quickly and without much thought, write out a bunch of answers on note cards or small pieces of paper. Maybe 20 or 30. Get a good variety of different things. The differences can be subtle too. This will be your adventure deck.
5) shuffle them together and then remove half of them.
6) Add 3-5 cards into the mix with "random" written on them.
7) Add a boss/climax of narrative card in
8) Maybe a few cards that give you some rest of a break from all the conflict (positive random cards)
9) Begin the narrative and try to achieve your characters goals.
10) draw a card. This is your first encounter/obstacle/problem that you have to deal with. How do you deal with it?
11) Whenever you draw a random card, create an obstacle using the mythic rpg event meaning table

A rescue adventure. A PC's village has been over run by trolls. Most of the villagers are enslaved and taken to a cavern deep in the hills south of the village.

Some obstacle random cards I might draw based on my mythic results (I roll this when I draw them so it is indeed random and in line with the logic of wherever the story might be at that time): Oppress/Military (Troll sentry's are everywhere!), Triumph/Weapons (A troll flame thrower blasts down the tunnel directly at me!), Starting/ Pain (poisonous gas chamber)

some positive random cards I draw: Release/Dreams (here is my chance to silently wake the villagers while not getting any attention), arrive/ dispute (the trolls are arguing and distracted, I can sneak by).

Obviously you don't want too many randomly good cards because the whole point is to creatively find solutions to the obstacles.

The narrative is about connecting dots. But for gm-less play, you're at least not entirely winging it. You have a structure and there are elements that you respond to in order to move the story forward.

I've tried this a few times solo and have found that I really get caught up in the story. Having half the deck disappear of what you'll expect to confront and then adding some random obstacles feels right and similar to life. I know when I'm dealing with something I dread, there are obstacles I can predict (but not entirely sure what) and then of course there's random shit that I never would have expected both positive and negative.

What I'm still thinking through:

a way that choices affect the deck later on, determining balanced ability checks/ encounters without "cheating". I also think you could divide an adventure up into two parts and creating two different decks for each part. For example.
Chapter 1: Finding the troll lair.
Chapter 2: Rescue!


I've also thought about a details/location deck that you draw simultaneously from.

I know I'm going to the troll cave so I write (in stream of conscious) a bunch of cave elements or details in the adventure:

its up to you to justify this in the narrative, connect the dots and make a story. This took me about 4 minutes to write out all the elements and "plan" my adventure.

I may try to detail a solo session soon. 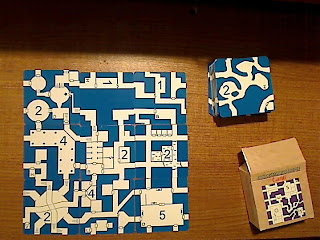 A week back, I received this awesomeness in the mail from inkwell ideas. While the Dungeonmorph dice look great, I decided to go with the geomorph cards. The cards are 2.5" and come in packs of 90 which include the Adventure, Explorer, and Spelunker geomorphs originally created for the dice. The design of these are beautiful - reminds me of the original D&D geomorph sets.

This is a great deal for about 20 bucks including shipping. The variety of dungeons you can create with these cards are endless. You can get a pack here:

I'll be looking to use these for a solo dungeon crawl. Maybe use the cards in a dungeon stack similar to Wrath of Ashardalon by laying out each new card as I reach an unexplored edge. I'll generate room contents with the Moldvay Basic D&D dungeon generator.

Also for those on a budget: 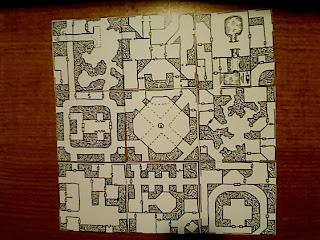 These are the original designs that started the Geomorph craze a few years back. Check them out at Dyson Logos: