Holy crap! The holidays are keeping me busy! I will be back after the new year with some more reviews. 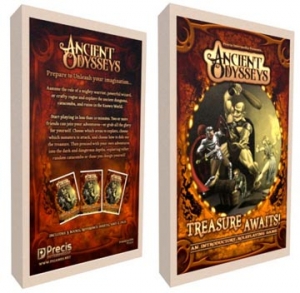 Ancient Odysseys: Treasure Awaits by Brett M. Bernstein and published by Precis Intermedia was released in January of 2010 and despite positive reception and a 2010 Judge's Spotlight Award at the Ennies, it didn't seem to make much of a splash. Which is a shame in my opinion. I've had this product for about two months and after playing it a few times solo, I have some thoughts which I'll detail below.

My initial interest in AOTA was the solo play option. Much of my review will be focused on the solo mechanics.

Precis Intermedia is currently selling AOTA in a Box Set format, PDF edition, and 92 page pocket softcover edition. For this review, I will be reviewing the Box Set.

The box set includes three digest sized rule books (for a total of 84 pages), a conflict action map, a page of heavy card stock Disposable Heroes minis, two d6, reference booklet, an introductory slip, and some extra character sheets. All of this comes in a nice sturdy 6 X 9 box and retails for 19.95 through Precis Intermedia.

Book One: Basic Play covers all the rules for the game from character creation (very speedy) to combat and action resolution. I love the fact that Brett is able to cover all the rules for the game in only 36 digest sized pages. All dice rolls are done by primarily rolling 2d6 which reminds me a lot of ICE's "Lord of the Rings Adventure Game" released in the early 90's which is very similar in that regard. Simple, yes, but it seems perfect for a rules lite system. Action resolution is very balanced without being over simplistic.

Players have the option between four races (human, elf, dwarf, and hoblings - which are basically halfings) and three classes (warrior, wizards, and rogues). Brett has also added a downloadable PDF on Precis' website that details the cleric class.

Book Two: the Dungeon provides an adventure that can be played by a group with or without a GM or by solo play. The adventure consists of the characters attempting to rescue a young Elven girl captured by goblins. They must enter ruins guided by a captured Goblin named "Gelg". He has a roughly sketched map that can give clues to the layout of the ruins. Sections in the adventure are divided into traps, creatures, secret doors, treasures, special events, as well as room detail descriptions. This is all set up in such a way where players can draw their own map as they proceed based on the information that they receive. I've played through this adventure twice and it seemed to take me about an hour.

Book Three: Further Adventures includes about stats for about 30 monsters and 20 traps, a short DM's advice section (if you choose to use one), optional rules and a random dungeon generator section suitable for solo or gmless play, as well as a postscript note by Brett.

1. A rules lite system that attempts to create a gmless solo rpg experience. I think its essential, in a solo rpg, not to overwhelm the player with overly complex rules. Outcomes should be clear and simple and little guess work involved especially since no one is "refereeing". AOTA does this very well.

I love how Brett has designed a dungeon that unfolds room by room as the players explore. Each room is described, detailing exits that are connected to numbered corresponding sections. This mechanic is very similar to Fighting Fantasy books but instead are entirely location based rather than choice/action/location based. This allows the player to feel like they are exploring a specific environment, that is truly unknown to the player, instead of randomly generated. This has been my main issues with other solo dungeon crawls such as Wrath of Ashardalon, Dungeon Bash and others.

2. AOTA captures the "old school" feel quite well. The artwork (by Matthew Vasey and Nicolai Nickson) is very evocative of retro titles from the 70's. In fact, the entire design and layout of the box set could best be described as an homage to earlier box sets. Brett clearly grew up with these games and it seems to me that he was trying to create something specifically for those of us who played (or still play) red box D&D and Tunnels and Trolls. Which is not to say that AOTA is not accessible to younger gamers, in fact, I think the simplicity of the rules makes this game a great entry for people new to RPGs.

One minor disappointment I have with the included adventure is that it feels a little too combat heavy. There are a lot of encounters. The bulk of the adventure is dealing with combat and trap detection. While this is the content of pretty much any classic dungeon crawl, I find myself wanting more action based tests. For example: a strength test for busting down a door, or climbing a cliff, or perception check. Maybe even a NPC encounter in the middle of the adventure could be included that could be handled by CYA style choice like: "Do you A) ask the witch for advice or B) Attack her etc." I think this could help give solo players a gaming experience that would be similar to group/gm guided play.

Overall, there is a whole lot to like about AOTA and if you're a solo player looking for some good dungeon crawling, I highly recommend this. Clearly, Brett put a lot of love and attention to detail into AOTA.

This game begs for more supplemental support and predesigned dungeons for solo play. Sadly, there doesn't seem to be much support from Precis Intermedia for the game. Maybe I'll try and whip up an adventure and post in both my blog and on the Precis Intermedia forums in the coming weeks.
Posted by lj at 8:43 AM No comments:

Email ThisBlogThis!Share to TwitterShare to FacebookShare to Pinterest
Labels: Reviews

My Plan for the Upcoming Weeks

I hope to start cranking out some reviews and opinions on some stuff soon. I also hope to post some summaries of some solo sessions as well.

Here are some things I hope to start writing about in the coming weeks: